You successfully implemented Azure AD Authentication in your Android app with the Microsoft Authentication Library. The application built and executed perfectly and passed all QA testing with flying colors. And then you published the application on Google Play. And authentication doesn’t work after installing the app.

If you exposed authentication error messages to the user, or had them sent to your team, then you might see an error like this:

“The redirect URI in the configuration file doesn’t match with the one generated with the package name and signature hash. Please verify the uri in the config file and your app registration in Azure portal.”

Another potential behavior that might indicate this problem is this: During development and QA testing, you successfully set up your app to use a supported broker to handle authentication and SSO. However, after deployment through Google Play and installation, the app no longer uses the broker for authentication.

In the past, Android developers owned and maintained their own private signing keys. However, now, Google Play Services generate and maintain their own private signing key for an Android Developer. This is actually a good thing, since the key will be securely stored by Google. The developer still maintains an upload key so that Google Play Services can verify the authenticity of an uploaded app bundle, but the actual signing is done by the Google-owned signing certificate when a user installs the app on their device.

How To Fix It

Generally, there are three major steps in solving this issue.

Each of these three steps are covered in more detail below:

For details on how to install and use the Msal Package Inspector, see my article here:
https://blogs.aaddevsup.xyz/2022/03/package-inspector-for-msal-android-native-guide/

To get the Signature Hash from the Google Play Console, first go to the Console and log in with your Google Developer account.

Once you are in the Google Play Console, select the app you are working on, then look to the left side of the screen. Under the “Release” category, expand “Setup” and click on “App Integrity”.

Now click on the “App signing” tab and you will see the “fingerprint” of the app signing key in three different variations. Copy the one indicated in the screenshot below: 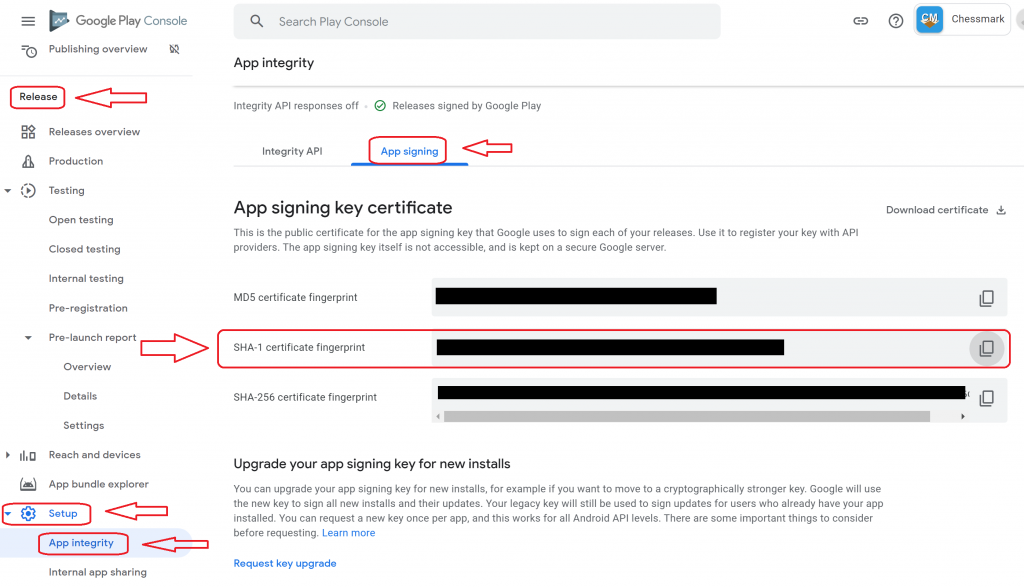 Copy the “SHA-1” fingerprint and paste it into the following PowerShell script as the value of the $Thumbprint variable. Run the script to obtain the base64 encoded fingerprint that Msal needs.

If you have come this far in developing an Android App using Msal, you likely already understand how to complete this step; however, I will provide basic guidance here.

Log in to your Azure Portal at portal.azure.com and navigate to the App registrations portal. This can be done quickly and easily by searching for “App registrations” at the top of the portal screen as indicated in the following screenshot:

Select the app registration for your Android app, click on “Authentication” on the left side of the screen, and then click to “Add a platform”. Select “Android” as indicated in the following screenshot.

As previously mentioned, at this point in the development process, you are likely already familiar with this process. I will cover the basics here.

There are two things you need to change in the application code: The Msal configuration file and the Android Manifest file.

The only thing to change in the Android Manifest File is the android:path property within the tag for the “com.microsoft.identity.client.BrowserTabActivity” activity indicated in the following screenshot. Paste the signature hash as the value for this property.